For ALL Sky Bet customers – Get a price boosted 20/1 on a home Tottenham Hotspur win over Arsenal with a score of 2-0. In general, Spurs odds look way too long currently to beat Arsenal –  A home game, improved home form and Arsenal not the best away compared to at the Emirates. This one is certainly worth a little speculative bet.

New customer exclusive from Betfair: 8/1 Spurs or 5/1 Arsenal + £100 Free Bet Bundle. 12:45 GMT Saturday.  A bit of a no-brainer here, if you’re not currently an account holder with Betfair that is.   To take advantage of this, just click on the link below and join; The promo code of ZEP607 will be automatically filled out for you.  You will also qualify for up to £100 in free bets, with a £20 free bet awarded with every 4x£10 bets.

Even sweeter, if your bet loses, you get your money back in the form offree bets.

Join Betfair and jump on this risk-free new customer exclusive.

It is a pretty even-looking contest on paper today and both Spurs and the Gunners have been in similar form in the league.  The table below shows the respective results from the North Londoners’ past six matches and overall there is not much between them: 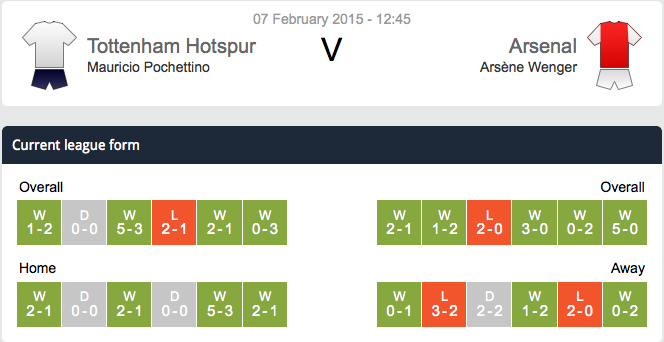 With the Lilywhites having secured a draw early in the season at the Emirates Stadium, this one could well be headed the same way.  However, Spurs and Arsenal have improved since then and now both look like different teams.  The White Hart Lane supporters have had plenty more to cheer about in 2015 and both teams are coming off big wins.

Head to head, Arsenal have bragging rights and in the last six meetings of these two they have lost just once in the Gareth Bale inspired 2-1 win at the Lane almost 2 years ago.  The new kid on the block is the much talked about Harry Kane and him and Christian Eriksen surely pose the most likely sources of goals for the home side today.  Arsenal will be relishing this match, with manager Arsene Wenger looking to put some distance between the bitter rivals with a famous away victory.  In the race for a coveted fourth place in 2015 this will surely be one that will shape that final league table in a big way.  Back in 2013 when Spurs did get their last North London Derby win they were above the Gunners in the table and it looked like a possible power shift but by the end of the season Arsenal were yet again able to get back on top – just. 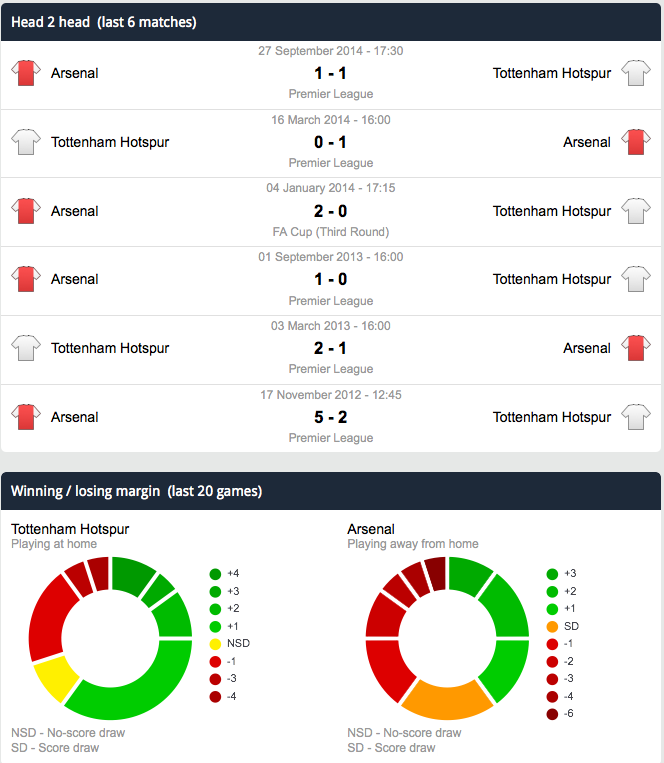 Spurs v Arsenal Head to Head, plus home and away performances

For this match, it is very difficult to predict a clear-cut outcome but the bookmakers have Arsenal as favourites.  One certainty is that the atmosphere will be great and it will be a proper dogfight.  Worth checking out the bookie specials for this match at bet365 & BetVictor, too.

BookieBoost – Get Value Bets on your Mobile device

Did You Know? You can get all of these Special Bookmaker Offers on the BookieBoost app, available on Android and Apple mobile and tablet devices.  Just check under the “Bookie Special Offers” Section.

Get the BookieBoost App here