Here’s a boosted odds alert ans analysis for one of this weekend’s Premier League matches.  Open a new account with BetVictor and place your first bet on Man City to beat Everton in the (win/draw/win) market on Man City v Everton and your odds will be enhanced to 4/1.  The game is on Saturday 6th December at 17:30 at the Etihad Stadium and our tips prediction engine has calculated the probability of a City win at 56% (26% draw, 20% Everton win).

Second placed City’s home record has been OK of late, winning 4 out of their last 6 matches there. They did lose one on 30th August against Stoke City 1-0 (courtesy of a Diouf goal on 58 minutes) plus a 1-1 draw with leaders Chelsea in this period after Lampard’s late equalising strike.  Apart form that home has been a sweet one for the Citizens.

Everton have not been travelling so well and have lost to Spurs and Manchester United away from Goodison Park  recently.   That said, they have managed away wins over Burnley and West Brom but Manchester City is certainly a much more daunting prospect.  Plus, City also defeated Bayern Munich at home in the Champions League.

Check out our stats chart for the Manchester City at home and Everton away records in their last 20 matches below.

In terms of head to head at the Etihad Stadium over the last few years, the best Everton have managed is a draw just over two years ago.  As can be seen below the other games held there have resulted in two goal margins to the Citizens. 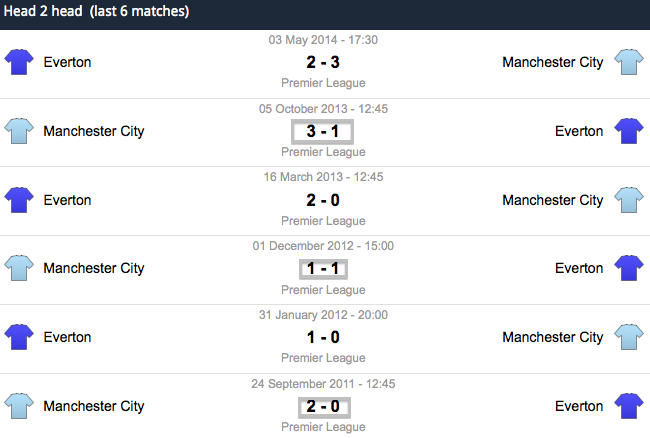 From this analysis of the stats it looks like these 4/1 enhanced odds are good value and we are recommending this bet to our readers who are new to BetVictor.

To take advantage of these enhanced odds, click here.

For more about BetVictor, check out our review of their mobile app.