Here’s an Arsenal v Chelsea betting offer worth looking at for Sunday’s match at the Emirates.  Bookmaker Titanbet is offering money back on selected markets if any defender scores a goal for new customers.  Not only that, but as a new customer you’ll also be able to take advantage of the Bet £25, Get £25 free offer.

Both of these top two teams possess defenders who pose a goal threat.  Our thanks to football stats site Turbo Scores for providing the current top-scoring defenders (below). 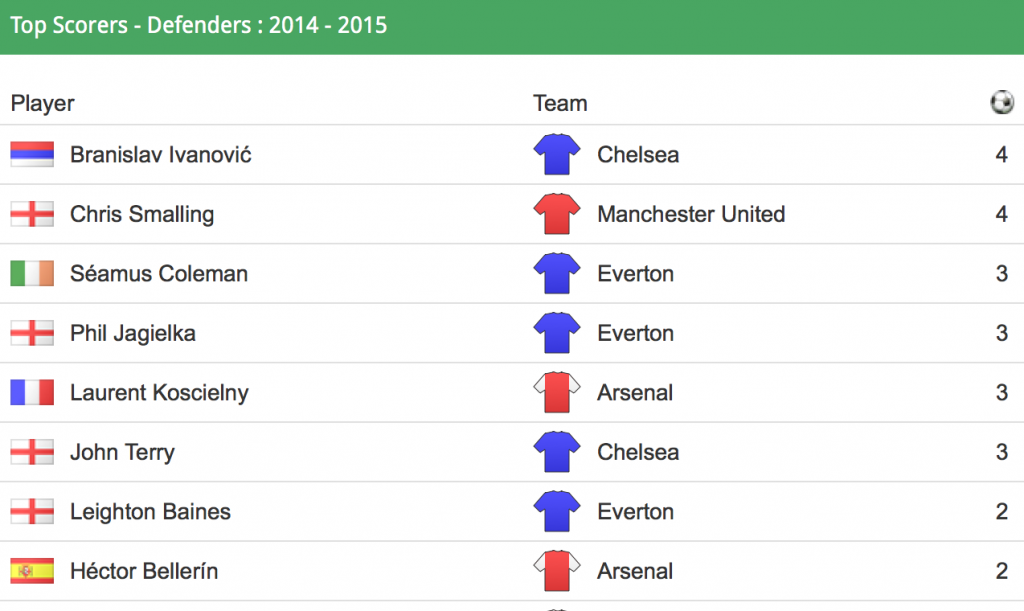 It’s the Blues’ defence who look more likely to score on Sunday, with the League’s top-scoring defender Ivanovic and John Terry netting 7 times between them already this season.  The Gunners have their own high-scoring defenders, too, in Koscielny and Bellerin who have contributed 5 of Arsenal’s 2014/15 goals.

With no less than FIFTEEN Premier League goals scored this season by the two teams’ defensive players, the chances of a free bet with your name on it look promising.

Oh, and own goals do not count for the purposes of this promotion.

-Place a pre-event single bet of £5 or more on Arsenal v Chelsea qualifying markets. If ANY DEFENDER SCORES and your bet loses, we will refund your stake as a free bet token. -Qualifying Markets are Correct Score, Anytime Goalscorer, First Goalscorer, Last Goalscorer and Half Time/Full Time only. – Only cash bets count as qualifying bets. Bets made with free bets or bonus funds are excluded from this promotion. -Own goals do not count for this promotion. -Minimum qualifying bet is £5. Max free bet token is £10. -Offer is limited to one per person, per household, per computer, per e-mail address or per payment details. -If multiple bets have been placed on one event, only the first settled bet will count towards the promotion. -Free bet will be awarded within 48 hours of your qualifying bet being settled. -After being awarded, you can use your free bet on any sporting event you like (excluding horse racing) at maximum odds of 4/1 (5.00). -Titanbet reserves the right to request additional documentation (e.g. a digital photo of yourself holding your ID next to your face, where the details on your ID are clearly visible) in order to determine your eligibility for this promotion. Failure to meet this requirement will deem your account ineligible to participate in this promotion. More on this match: Arsenal host Chelsea for another huge London derby, in which the Gunners seek their first win over the Blues since the epic 5-3 victory at Stamford Bridge in October 2011. With eight consecutive Premier League wins, in addition to an FA Cup final qualification, Arsene Wenger and his lads are playing their best football of the season. From Ospina in goal and Bellerin on defense, to Cazorla & Ozil in midfield and Giroud & Sanchez on attack, Arsenal’s squad has produced some magical stuff for the Gunners faithful lately. Having said that, they’ve yet to secure an automatic Champions League qualification for next season, and this match could be the ultimate boost towards this goal. As for their opponents, league leaders Chelsea are ten points ahead of their rivals, and with a series of one-goal-difference victories, the title looks now closer than ever. With a crucial winning goal against Man Utd last week, Eden Hazard has added another decisive moment to his phenomenal season, helping his team once again to step up over their main rivals in the top tier. Chelsea’s well known efficiency is expected to stand up to the test, but Mourinho’s lads have already proved they’ve got what it takes in almost every scenario.
Terms & Conditions
Show less
Last modified: April 22nd, 2015 by Betmeister
Leave a Reply